skip to main | skip to sidebar

Sorry everyone, I've moved... but on the upside, I've posted already.

See the reply to Padraic's comment at my new blog:

http://civilservicereform.wordpress.com
Posted by David Hammel at 9:35 p.m. No comments:

Last week, offices across the country celebrated, "the importance of our federal public service employees and give each and every one of us an opportunity to reflect on the many contributions we make to our Canadian society through our professionalism, resourcefulness and hard work which enables us the quality of life we all enjoy." (Link to federal public service week website.)

However, I find this imagery of the public service lacking. Professionalism has been restricted by executives and unions negotiating, resourcefulness restricted by policy and red-tape and hard work - well... depends on who you are. In comparison, if we are to observe the police force, the mantra remains "to serve and protect" - doing their job for society.

My problem: I believe in people. To to believe in what they do and to make the right decisions. When you put restrictions on people to the point government tends to do, people revert into a self-serve culture. A good parent teaches a child responsibility by holding them accountable for their actions but also giving them the opportunity to make mistakes.

In the "celebration" of public service week, I found a culture expecting more for themselves instead of being the representatives of the Canadian public. It will take a generation to change the culture, but the result will be an organization that can really serve the public .

When this occurs, we will really have something to celebrate!
Posted by David Hammel at 3:24 p.m. 2 comments:

Okay - this will be the last time I will need to apologize for a long gap between postings. I like to think I have a more legitimate excuse this time though. Two things have happened that I am proud of and relate to my passion to reform of the civil service:

1. I wrote an paper for an IPAC (Institute of Public Administration of Canada) competition about "Challenges and Opportunities in the Public Sector," which resulted in winning it (originally I was going to post the full thing here but it is a little too large - so I'll just provide a link to the IPAC site when they have it up.

2. Somewhat relating to the first, I have been asked to be on the board of directors for the IPAC National Capital Region.

Regardless, I still apologize for the time gap and I will post a real one before the weekend is out - or else I give Casey and Aaron complete freedom to harass me.
Posted by David Hammel at 11:05 a.m. No comments:

It's been a while - as my commenters would inform you - sorry. I've been busy finishing another school term but there will be more frequent posts next few months, stay tuned.

I have recently been reading John Ralston Saul's most recent publication called "The Collapse of Globalism." He describes the fundamental purpose of good government - and its alternative - as depicted hundreds of years ago:

"If in Siena you walk into the old council chamber of the Palazzo Communale - the city hall - you find it wrapped by an early-fourteenth-century fresco over forty metres long. The subject is good government. This was the first non-religious cycle painted anywhere in the West. You could say that Ambrogio Lorenzetti had produced the first modern visual expression of responsible, citizen-based government. Down one long wall are city scenes showing the results of good government, including peace, friendship, learning, the arts, general well-being and prosperous businesses; facing it are the results of bad government, images of urban decline, of fear, violence and suffering. There the only successful business makes weaponry. 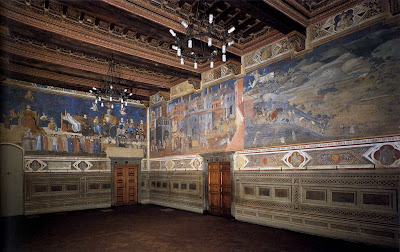 And on the central wall is a representation of how a civilization actually works. A large woman called Wisdom floats above another, even larger, called Justice. The two arms of Justice's scale spring from her head, balanced by the influence of Wisdom. Suspended from each of the arms of the scale is a brass tray holding a small figure who distributes justice. And from these trays in turn two cords hand down, only to be grasped by a third large woman - Concord. She winds them together before passing this complex rope into the hands of the twenty-four magistrates who run the city. They are slightly smaller. They in turn pass the rope to a large male figure, Ben Comun, the common good, the Good Commune. Finally, on either side of him are seated six more large women - Peace, Fortitude, Prudence, Magnanimity, Temperance and, once again, Justice. These are the working elements of the common good. The humanist support system. 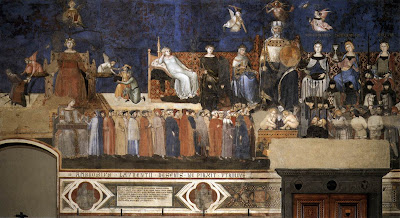 If you then look back to the figure of Justice, you notice that the small figure in one of the trays is handing down an object called a staia - a bushel - to two extremely small figures. They are merchants. The staia was an instrument of just measure; that is, of regulation.

So wisdom permits justice to produce concord through equilibrium. And the resulting shared common good is maintained thanks to the play between six humanist qualities. They whole process of civilization is driven by justice, and among the many beneficiaries are those who turn the wheels of the economy."

Within this imagery, public servants must situate themselves as the magistrates and abide by the virtues of good governance. (Some of this imagery is compelling if you have the time to look.) Strangely, I have to look back into the 14th Century to find a full understanding of the fundamental principles of government. "Epiphany" is the word best used to describe my reaction. If these values are upheld over nonsensical processes and procedures, the public sector can reach a higher potential.

Next question: How?
This will be addressed in the following posts - including how do make the how more efficient and effective.
Posted by David Hammel at 10:56 p.m. 1 comment:

Introduction to the Blog

I agree with the opinion of the causal viewer of this blog: the subject appears mundane if not utterly boring. "Why anyone would want to express their views regarding the general activities of the public service is beyond my comprehension." And yet, the complaints and desire for change is an everyday activity both within and outside of its walls. This blog will expand on these complaints to find the root of the problem and constructive offer alternatives or ways to improve the current situation.

I do recognize that this can be a dry subject so I will try to do a number of things to make the blog enjoyable:
The importance of this institution is as far reaching as it is important to all Canadians. In a business sense, the owner and consumer is the Canadian public because the revenue and products are directly related to every Canadian. If you are not interested how your money can better be used or the services more relevant, you should be!
Posted by David Hammel at 6:35 p.m. 2 comments:

David Hammel
A student of Political Science at the University of Ottawa and employee of the Public Service of Canada.